How do humans benefit from animal research?

Animals are different from humans in many aspects, but there are also plenty of similarities, especially at the biological level. Certain fundamental processes, such as how cells and tissues work, are remarkably similar across animal species, including humans. The structures and functions of organs like the heart, lungs and brains, are also similar across most kinds of animals.

In 1953, Dr. Jonas Salk was present when it was publicly announced that the polio vaccine that he developed, using animal testing at the University of Pittsburgh, had been created. According to the World Health Organization, the number of polio cases has decreased by more than 99%, from an estimated 350,000 affected patients in 1988 to only 22 reported cases in 2017. Salk's vaccine has saved more than 16 million children from becoming paralyzed and prevented more than 1.5 million childhood deaths.

It is also important to conduct animal research to understand and predict the emergence of many "zoonotic" infectious diseases that spread between humans and animals, such as Lyme disease and rabies. The Human Immunodeficiency Virus (HIV), which causes AIDS, is thought to have first originated in nonhuman primates before spreading to humans. The bird flu epidemic is a more recent example of a zoonotic disease that evolved to infect humans.

Do animals benefit from this research?

Yes. Antibiotic and vaccine advancements have helped us prevent many devastating diseases in animals.

For example, Dr. Julius Youngner used the same techniques he used as a key contributor to the development of the polio vaccine at the University of Pittsburgh to create the first ever vaccine for equine influenza (horse flu). Similarly, vaccines for rabies and treatments for heartworm infestation and cholera in dogs arose from animal research.

One of biggest success stories in veterinary science was the development of a vaccine for canine parvovirus. The highly contagious virus which caused significant death and suffering in dogs was first identified in 1978 and quickly spread around the world. Researchers found that parvovirus is similar to the feline panleukopenia virus, for which a vaccine was already available. Scientists used their knowledge about the existing vaccine to quickly create and test a new vaccine for dogs. The canine parvovirus vaccine stopped the spread of this disease and has since saved the lives of countless dogs.

The ability to treat diseases has also prevented the death of many endangered species and contributed to preservation efforts. Techniques developed through animal research such as artificial insemination and embryo transfer allow us to breed animals in captivity and help prevent the loss of at-risk animals.

What kinds of animals are used in research?

Why do clinical trials in humans require prior animal testing?

Animal testing is not an alternative to testing in humans. Rather, it is an important complementary part of the effort to find new therapies. It is important part of the process for two main reasons:

First it reduces the number of interventions tested. The development of treatments is a long and arduous process that starts with scientists testing hundreds or thousands of chemical compounds for the potential to treat a certain disease. Using various techniques including computer simulations and testing in lab-grown cells, they then narrow it down to a much smaller group of tens or hundreds of potential treatments. Since it is not possible or practical to test each candidate in a human trial, researchers use animals to determine those that are the most promising and can be further tested in human clinical trials.

The second major reason why animal testing is conducted prior to human clinical trials is to understand how a therapy works in the body and ensure that it does not have any significantly adverse effects. It is true that treatments that work in animals don't always work in humans. In fact, this is the outcome for a majority of candidates. However, it is important to note that a major goal of animal testing is to prevent harmful or highly toxic drugs from being tested in humans.

Can’t scientists use something other than animals?

In many cases, scientists can and do use research models other than animals. The most common alternative is cells cultured, or grown, in the laboratory.

Researchers, including those at the University of Pittsburgh, are also constantly striving to reduce the use of animals and develop alternative model systems. Organ-on-a-chip technology is one of the most promising advances in this regard, and Pitt's Drug Discovery Institute is a leader in the effort to develop such technology, which mimics human organs and can be used to test drugs.

These advances, however, are still in an early stage, and there are many areas of research that require the use of animals. Though computer simulations are being developed that could one day replace the use of animals, such technology is limited by the fact that we do not know enough about how the body works to create an effective and accurate simulation that can completely eliminate the use of animals.

Who cares for the animals used in research? Are they properly trained? How are the animals cared for?

Everyone who works with laboratory animals has a responsibility to care for their wellbeing. Specialized animal care technicians perform daily animal husbandry tasks, while dedicated veterinarians oversee the animals' physical and psychological health. The scientists who work with these animals are also closely engaged in their care. Researchers depend on robust animals to produce reliable results, so it is in everyone’s best interest to provide the best care possible for the animals.

According to federal regulations, no person can be listed on an active animal research protocol until they have completed required training. Every person who works with laboratory animals at Pitt is trained on proper research conduct, the responsibilities and regulations surrounding animal research in general, and the specific needs and considerations of the species with which they will be working. Recertification is required every four years. The Division of Laboratory Animal Resources oversees training and day-to-day regulatory compliance of animal research personnel.

In addition to their basic needs, such as food, water, and proper housing, laboratory animals are also provided with environmental enrichment to express more wild or natural behaviors, which decreases any detrimental mental or physical health effects that may result from caging. For instance, environmental enrichment could involve providing shelters and nesting materials to species that naturally nest, group housing or human interaction to social species, the ability to forage for food, and opportunities to play, climb, run, swim, or jump. Pitt has dedicated enrichment specialists who coordinate and oversee these efforts.

How is animal research at Pitt regulated?

The USDA, Office of Lab Animal Welfare (OLAW), and Association for Assessment and Accreditation of Laboratory Animal Care International (AAALAC) oversee animal research at the national level to ensure that all animal research is done in accordance with the Animal Welfare Act, The Guide for the Care and Use of Laboratory Animals, and the Public Health Service Policy on Humane Care and Use of Laboratory Animals. Internally, Pitt’s Institutional Animal Care and Use Committee (IACUC) reviews and approves all animal research protocols prior to the initiation of experiments. Periodically, the USDA, IACUC, and AAALAC inspect Pitt lab spaces and audit records to make sure that researchers and animal care staff are following the proper procedures. Serious infractions result in the suspension of research activities.

It is important to note that scientists use animals only when there are no alternatives available. Additionally, researchers using animals must adhere to strict policies and protocols that include providing rigorous justification for the need to conduct animal research, demonstrate that they have eliminated the possibility of using alternatives or included alternative approaches where possible, and use the fewest number of animals needed.

Has animal experimentation increased over time?

The USDA reports that over the past two decades research on large animals has been in decline. As of the 2016 USDA report, the number of large animals used in research is less than half of what it was in 1994. Overall, scientists in the U.S. use approximately 12-27 million animals in research, of which more than 90% are rats, mice, birds or fish. 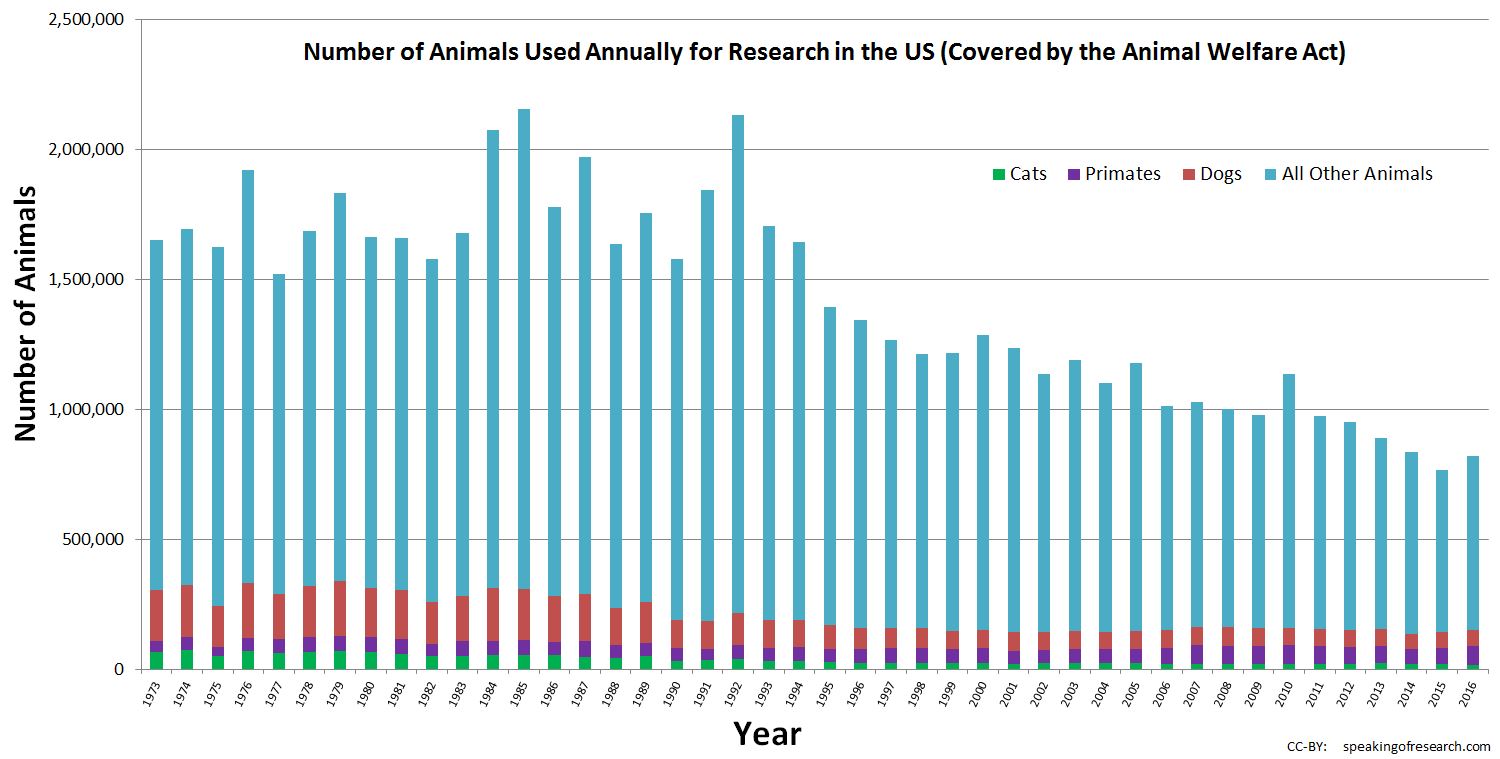 What happens to research animals once the experiment is completed?

Most animals under study must be euthanized to obtain tissue for further evaluation or for in vitro experiments. Euthanasia is the act of inducing a humane death, and the guidelines for proper euthanasia are established by The American Veterinary Medical Association.

Animals involved in experiments that do not require euthanasia may take part in additional experiments. Nonhuman primates, for example, can participate in many studies.

What is the difference between animal welfare and animal rights?

“Animal welfare,” as defined by the AVMA, is a human responsibility that encompasses all aspects of animal wellbeing, including proper housing, management, disease prevention and treatment, responsible care, humane handling, and, when necessary, humane euthanasia.

In contrast, “animal rights” is a philosophical view that animals have rights similar to or the same as humans. Many animal rights proponents believe that humans do not have the right to use animals for any purpose.

Animal research at Pitt abides by the principles of animal welfare.

Millions of people around the world have been given the opportunity to live a healthy life thanks to medical breakthroughs made possible through animal research here at the University of Pittsburgh and other research institutions.

Americans for Medical Progress endorses the “3Rs”: refinement of tests so animal distress or pain is minimal, reduction of the number of animals used in a study, and the replacement, whenever possible, of animal experiments with non-animal experiments.

We actively champion the development, validation, use and regulatory acceptance of alternatives to animal research.